This month Master Winokur tells you about the importance of numbers.

This month I will tell you about the number four (#4) and some of the attributes that make it important. For example we have just had the Autumn/fall Equinox,  lets talk about that fact there are 4 season: Fall, Winter, Spring, and Summer, (in that order according to the Old Testament). We know that we humans have 4 fingers (and a thumb), related to the cardinal directions East, West, North, South.  Our cars , vans, SUV’s, could not even run if we did not have 4 tires under the carriage to connect and move the car from place to place. In the concealed world we use 2 eyes to see kung fu and 2 ears to hear the master/instructor speak, again 4. We only have one mouth to speak the mysteries we have learned, but lets look more, we have 2 lips

(upper and lower), as well as 2 sets of teeth (upper and lower) to eat with, there’s another 4, but it’s still one mouth. Let’s look ever deeper doesn’t your tongue have 2 sides the upper (dorsal),and the (ventral) the lower, and don’t you have an upper jaw (maxilla),  and a lower jaw (mandible) that 2 + 2 again, hey there is another 4.

As we learn our systems one must learn a pattern, know the pattern, understand the form, and master the form, but mastery is a road not a destination (the circle square) also called the Dragon’s square. You need all 4, 8-Animal forms to contain the 5 th animal, in our order the tiger (water) must be contained. Not to mention the fact that we are learning physically, emotionally, mentally, and spiritually, wow another # 4.

If speaking metaphysically we have the elements of nature air, fire, water, earth, or Leopard = Earth, Crane = air, Snake = fire, and Tiger = water, the 5th one Dragon = spirit. If we are speaking in the aspect of the Chinese elements: wood, water, fire, earth, and metal, which correspond to the KO and Sheng Cycles (more on this concept later). However the Chinese element of metal = spirit, and wood = air/wind. Back to the number 4, as in the amount of weeks per month 4, again humans have 4 limbs in which to serve (2 arms, 2 legs). We can speak of many physical body connections such as the heart with the 4 valves. We can also speak of 4 types of medicine Allopathy (conventional medicine), Osteopathy(western, and eastern chiropractic, Chinese acupuncture/acupressure, as well as energy balancing and healing), and Naturopathy (belief that G-d provides a natural cure such as herbs, plants and roots used for healing) Naturopathy also makes use or other, proper diet, physical exercise (yoga and martial arts are considered important to lead to overall health of the body. The rules of mortal reasoning, while Homeopathy tends to transcend mortal reasoning with its Law of Similars, (more on that later). As we can see the # 4 is an important part of daily life whether we see it or not. There is much more to say but not in an article, ask me if you want to know more. Numbers control the universe, and are everywhere.

If you are interested in writing a short article speak to your sifu, or to me SiGung Scott directly at the headquarters school, or email, or call in your story.

Master Winokur conducts seminars and workshops on many aspects of healing, pressure points/acupressure, Chi Kung (energy breathing exercises to heal yourself & others, many, many more topics, on a wide variety of subjects,  just ask… today.

Si Gung Scott Winokur with one of his many teachers31st Generation Shaolin Monk, and 8 th Generation Wu Dang Master, Professor Yu Zheng Liu, picture taken in 1999 at Midwest Chinese Martial Arts Center. The Professor gave Master Winokur the Shaolin name XingYong (33rd Generation). Professor  was a chosen Disciple of the 30th Generation Shaolin Temple Abbot Su Xi, who passed away in March of 2006. The Abbot only took 10 students and Professor Liu was one of the privileged. His name is listed on the scroll of  Su Xi above the radio on the North wall of the school.

It was an honor to have been trained by the Professor, your Grandmaster Instructor, and Su Xu is your Great Grand master instructor. Master Winokur’s original instructor was Grand Master C.F. Tong was the instructor who made our system the updated Style it is today, by mixing his Northern Shaolin, with Southern Shaolin (Sil Lum), with the original Chi Lu Chuan system expanding it to what it is now, Shaolin Xing Yong Chi Lu Chuan Kung fu and it’s Weapons system, 30 Hand forms-30 weapons forms, Chi Kung, Chin Na, San Shou, San Da, and Shuai Chiao (Chinese wrestling/throwing.

Used in the White Willow kung fu system. Only Leslie, Darel, and Andrea, learn the LLP Dragon style at this time. This unique class usually meets Saturday morning at 8-9 am, and some Tuesday evenings. Ask if you are truly interested, serious inquires only, this is difficult and complicated system to learn.

Look on the counter of the main headquarters school – please let us know before you compete!

*** RESET your clocks November 2, 08  - we FALL BACK and set clock back 1 hour for daylight savings time, don’t forget each year someone is late to work or class due to failure to reset ALL the clocks, including your car, and microwave oven.

*** NO CLASS Thursday November 27, 08 THANKSGIVING – We will have a make up sparring class in December to catch up. Please mark your calendar – don’t drink and drive!!!

--Read an portion of

Weapons have been around since the dawn of time, when the caveman realized they must hunt for food to sustain their daily living.  Down through history weapons have had a major role in battles between different tribes and cultures.  Martial arts weapons have been no different as man learned to fend off the elements of nature as well as his fellow man, weapons have been the instrument they used.  In this book I will discuss some of the significance of different martial arts weapons, their uses, some locations where they were used, some background information and history relating to each one.  I will also explain their symbolism in relation to the world around us.  Many cultures have used martial arts weapons, but I will primarily delve into the Chinese weapons system.  This volume will also explain similarities and differences to Okinawa Ku-Budo  as well as Japanese, and Polynesian, and  Archipelago Island weapons.

Martial arts weapons are still widely practiced today by  most Chinese, Okinawa, Japanese, and Polynesian stylists. However many of the more exotic weapons have fallen by the wayside. Many masters today seem to refuse to pass on some of the ancient and traditional forms of these weapons. In modern tournaments you hardly see the weapons of the past but maybe only the basic staff, spear, broadsword, and the straight sword, which is mostly used by Tai Chi practitioners. Many of the weapons have taken on a Sport quality, meaning they are altered from their traditional form to make them more exciting to the crowd watching the event. This sport aspect has been consuming the traditional values, qualities, and morals of ancient weaponry, as forms are mixed with many gymnastics, and other styles and systems forever changing and altering character building techniques based on real life situations on the past. If you are lucky enough to find a qualified master who even knows these rare and more exotic weapons, it will be extremely difficult if not impossible to convince them you are a student worthy to receive that knowledge.

Pushing your luck does not count as exercise

Don’t beat your drum while in the Tigers cave

If you beat your horse you will have to walk

Wisdom is not a flower to pluck, but the Mountain difficult to climb

The man who honors his teacher, honors himself

* Thank you to all students who helped out a this year 19th Anniversary Invitational Tournament Saturday October 4, 2008, you have my gratitude 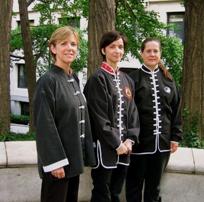 Sifu Cati began training in 1992 at the original school at 7944 Wornall, the 1st building.

Sifu Cati Blanche pictured in the middle with her students on both sides of her.

** A Free Women’s Self Defense Seminar was held October 18, 12-2 pm at the Headquarters School, several women learned life protection skills. Master Winokur gave a free month of class to all the women who attended the class. You might see new faces in the next few months, please welcome these new students to our family. My thanks to the volunteers from our schools, Brian Mckinney, Sifu Leslie, Sifu Jason, Sifu Wade, and Dan Busenbarrick. Special thanks to Wade Jessee who took a beating at the hands of the empowered women getting excited, poor Wade flew like an airplane 20 or more times several feet in the air (Wall Pin self defense- Dragon smashes the melon), and the dreaded “Bad Boyfriend” against the man that puts his arm around your shoulder, when you don’t want it there.  MCMAC always has a free seminar in the month of October to remember Brest Cancer Awareness Month. We also host 2 other Women’s Self Defense 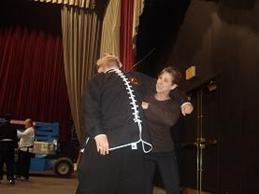 Seminars totaling 3 per year. Our team also goes out and teaches many workshops around the Greater Kansas City Area, if you wish to host a seminar/workshop at your job, health fair, area festival or gathering, just ask Si Gung Scott, as we do demonstrations for many events, if you wish to join the Demo/teaching team, again speak to Master Winokur, or one of the Sifu’s. This is important to educate the public as to the differences as well as the similarities to Kung fu and other martial arts styles. In addition the beauty and effectiveness of our kung fu that uses little or no strength to escape, defend/survive an attack, and win.

The Journey of 1000 Miles Begins with one step

For all inquires, classes or programs available email  eightanimalkungfu@yahoo.com

Back to Other Links page 2