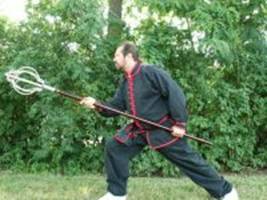 This time we will explore the yin yang symbol as requested by one of the students.

First it represents complimentary opposites, both Male and Female, Light and Dark, Day and Night, as so on. We can go on to say it is Heaven and Earth as well. In our kung fu we see on one side the Tai Chi quality (water –soft, yielding) and at the same time Wing Chun quality of Aggressive, or Kinetic energy (fire- explosive). This energy in motion, and the yin water energy, and the dots of the yin yang symbol combine, and we get the mix of the yin and yang energies, both active and passive. Let’s look at some examples right in our environment. Most,  if not all humans have fallen down in their life, if you don’t know or have never been taught how to correctly fall (rolling/falling-one of the 18 Shaolin Skills) you would probably stick out your hand or wrist to break or stop your fall. This will result in a Smiths Fracture of your wrist, however if you were to fall forward and down, again breaking your wrist, this type is called a Collis fracture. Here we see yin and yang once again, we don’t want to see these ever in class. If we were a student of science we could speak of the Marianas Trench in the Atlantic Ocean (this is the yin) and the Pacific Ridge (yang) opposite of the Trench in the Pacific Ocean. This Marianas Trench is the deepest part of the Ocean reported to be at least seven miles deep, or more (remember the movie the Abyss, that was the trench). There are many more examples we overlook, one does not eat a hot dog or hamburger usually without a bun (yin/yang). Most of us use ketchup or mustard on a hotdog, again we see yin/yang the burger or hotdog being the substance and ketchup/mustard are the liquid. Even when you put a DVD or Game into the machine to run it, you are again using the yin and yang principle. How could you plug in your cell phone into the lighter or port in your car to recharge it without using yin/yang, think about it; there are so many additional examples it overwhelms the brain, which is really two hemispheres
yin and yang respectively.  I will site other examples use your own head, it is endless which is like learning anything of use, it can be thought of on many different layers, and levels depending on who deep you look, remember the Marianas Trench is 7 miles deep we can not even comprehend what could live that far down, in the cold dark murky waters.  But space or outer space relates to the concept of the Upper Waters, that G-d spoke about during his seven days of creation of the universe, he further said let there be Lower waters the Seven Sea’s or Oceans of the Earth. Just as Chinese Shaolin Philosophy says a firmament is in between them or where we live. We can hardly know what is so far above us or even below us for that matter when you think about the seven mile deep Marianas Trench. I have always told you, if something is revealed, something is always concealed as well. Using science once again we know that of all the planets in outer space only two, Mercury

have no Moons. If we try to attempt to understand why could take a lifetime, but remember that the planet Mercury is the communication or Air/Wind attribute, while Venus is the Earth planet attribute and again we have yin and yang. The fact the humans must breath air to live and we can’t go with out it for longer than three minutes (most only 1 ½ minutes according to lifeguard studies), and we must eat solid food to sustain our bodies. Breathing in oxygen and out carbondioxcide is also the concept of yin and yang, whether of not we pay attentions to it of not, it happens. Eating food also results in removing the food from our body and again the principle shine through.  These are the two ways we get chi or energy, the air we breathe and the food we eat (yin and yang). So you see whether you realize it or not we are connected to the concept of yin and yang in our everyday lives. One of my teachers (Luo Shur),  GM Tong said “You don’t need umbrella, but you will get wet if you don’t use, you must know when it is going to rain” think about that one for a while… email your questions to our new email address mcmacinfo@yahoo.com, and maybe I will

write about your question,  look below

You may submit any question to SiGung Scott at email address above or ask me in class, some topics are not suitable for the newsletter and will be answered privately, keep asking if you wish to really learn on other levels and layers of understanding…